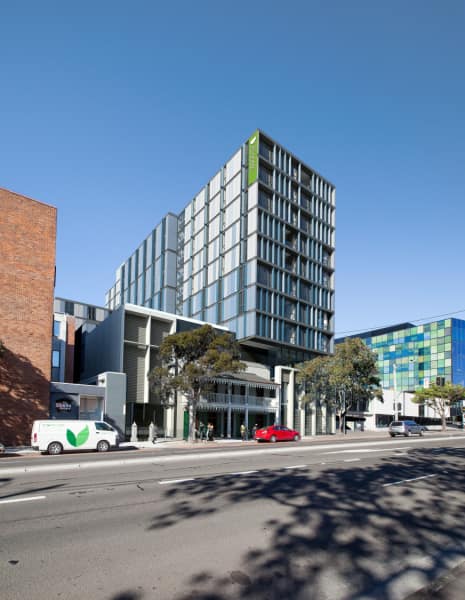 The early stages of the project were complicated by the discovery of a heritage significant area within one of the buildings marked for demolition. The deteriorating shell of Cypress Hall, which dates back to 1859, was discovered by City of Sydney during an inspection, and this discovery had major impacts on the development consent, the structure of the surrounding building, design & construction programmes, and budget.

The completed building is shared between Urbanest and the Catholic Archdiocese of Sydney (CAS). The CAS facility includes the restored portion of Cypress Hall, a Chapel, open plan and enclosed office spaces, meeting rooms, outdoor terraces, a kitchen and a library.

The Urbanest facility includes 400+ student accommodation units which are each provided with their own bathroom “pod”; these pods (330 in total) are prefabricated off-site under an agreement between Urbanest and a third party. Supply and installation of these items, as well as the associated contractual & legal implications, presented many opportunities for the team to develop their problem solving skills.